Sei in: Home1 / info in english 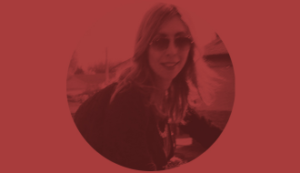 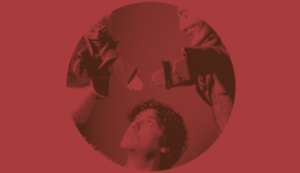 I burattini della Commedia is a cultural association founded at the end of the last century. We deal with the production of puppet shows and event coordination. We have made extensive studies on the use of the puppet in the commedia dell’arte , and at the same time we have knowledge about the use of puppetry in education and social fields. In the last fifteen years we have worked with refugees in Albania and Kosovo, in hospitals, prisons and all levels of schools, community centers and universities. Mixing puppetry with music and literature.

Moreno Pigoni is a puppeteer and training expert, Elisabetta Della Casa is responsible for communication, administration and theatrical organization.
We organize animation theater programs in the province of
Modena and a performing arts festival in Vignola (www.oblovignola.it).

The way we understand commedia dell’arte with puppets resembling maybe more to the theatrical form that existed before Goldoni’s reform. A way of acting more animalistic and tied to improvisation and communication with the audience.
Commedia dell ‘arte is well known in Italy because It’s part of popular imagination and it has a strong relationship with the masks of Carnival, which was born in Italy. Commedia dell ‘Arte is a term coined at a later date to describe the emergent professional theater of the sixteenth-century Italy.”Arte” in italian means also profession so this is the reason of the word “Arte”. A number of performers were masked and this caused it to be referred to in the later eighteenth century as the Comedy of Masks. The characters we use are the same that were used time ago by puppeteers as well as actors, actually with a similar repertoire, we only have changed rhythm and social context. These characters are:

There are also some Witches, Devil and other evil characters, coming from medieval Sacres Representation. 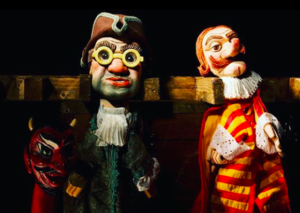 The repertoire of our company is based on old canovacci dell ‘Arte, comedies and short stories of the tradition of our region. The puppets and masks we use in our representations are hand carved by excellent craftsmen, faithful to a long and glorious tradition that we try to preserve and innovate.

The show: IL DOTTORE INNAMORATO (THE DOCTOR IN LOVE)

Summary: The powerful doctor Balanzone wants to marry the young Lisetta, Sandrone’s daughter. To achieve his purpose, the doctor promise to Sandrone a big amount of money… but the beautiful donzella is indeed fiancé with Arlecchino and she wants to marry him. Arlecchino has an idea: he should go to look for the powerful Witch Gertrude in the Enchanted Forest, she could help them with some spells. After a dangerous journey through the dark wood Arlecchino meet Gertrude which proposes him a mysterious magic filter to resolve the love affair…and her love affair too!

Title: CONFERENCE SHOW ON THE 500 YEARS OF COMMEDIA DELL’ARTE
in this show we stage the masks of commedia dell’arte accompanied with live repertoire of original music-viola da gamba played by Rosita Ippolito. The origin will be explained representing the typical lazzi (pieces) of the characters with puppets. a journey through the history of the commedia dell’arte
Duration: one hour 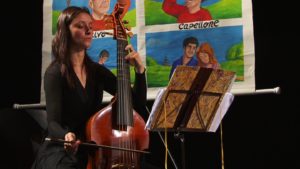 We strive to impart knowledge through courses and training about use of puppet in education and social work. We developed this sensitivity based on the experience at the Casa La Encendida a cultural centre in Madrid where Moreno Pigoni has been responsible for the puppet workshop in the program “Por Una Casa Para Todos” cycles of workshops on Intergenerational and Inclusive Leisure (2008-2014). Since 2013 we have a course in the Faculties of Social Work and Education of the Complutense University of Madrid (UCM) titled “Puppet Technique and dramatization for socio-educational intervention”
For the year 2017, the first specialization course “Puppet theatre as social, educative and medical tool” is expected to start at the Faculty of Education and Human Science at the University of Modena e Reggio Emilia (UNIMORE).

.
The objectives of the training through puppet theatre are the following:

-The courses are designed to facilitate the cognitive and methodological tools of the animation theater for people who wish to work as educators and / or medical and social health professionals. In particular, the courses have as objectives:

-To give to know theoretical and practical skills in which animation theater become an opportunity for intervention in social, education and health. For the health and growth of the human being and its psychological well-being at all stages of life.

-Provide theoretical and practical basis for the use of animation theatre’s tools and methods through new digital technologies.

-Develop and improve cooperation between educators, trainers, health experts and professionals of puppet theater and digital technologies. In order to promote processes of inclusion and social cohesion of the people.

We can organize courses for universities, cultural centers, schools, theaters. 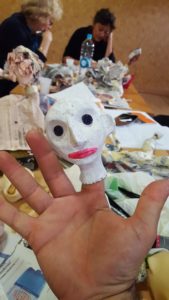